We are a network of local individuals & community groups standing up for the interests of people in Tottenham, especially around ‘regeneration’ issues. All welcome to get involved – please come along to a meeting or get in touch. Meetings are advertised via the elist.

For all those who live, work or are active in Tottenham who want to stand up for our local communities’ needs

The Our Tottenham network – see a list of supporting groups, at the end – have organised this action conference to bring together the key local community groups and campaigns in Tottenham who are affected by the Council’s ‘Plan for Tottenham’ and other planning and regeneration issues.  The idea is to work together and fight for our common interests, our neighbourhoods, our community facilities and for the needs of our communities throughout Tottenham.

The conference will include presentations from a range of local community groups, and workshops for all to discuss how Tottenham people can defend and promote action around the following issues:

* To bring local activists and campaign groups together whose aims are to oppose all inappropriate planning and developments and campaign for/defend facilities and proposals which are led by local residents, for the benefit of local residents, and improve neighbourhoods for residents’ benefit – not just for the benefit of big business.
* Discuss some of the major unsuitable aspects of current local development plans (eg high rise blocks, high rents and gentrification, over-development, loss of Council housing or community facilities etc) where interests of the residents have not been taken into account, what we can do to oppose plans and to support any alternative plans (e.g. Wards Corner, Tottenham Plan/Love Lane, Lawrence Road, Brook Court)
* To show support for and/or help initiate new resident and community-led development plans that support the interests of local people (e.g. around the Tottenham Plan/Love Lane, and St Anns Hospital)
* Share experiences of successful local campaigns and community-led regeneration for example Broadwater Farm Residents Association, Friends of Downs Lane Park, Friends of Lordship Rec, Wards Corner Community Coalition, Everybody’s Music, Bull Lane Playing Fields Campaign etc, to inspire new campaigns for resident-led regeneration.
* Offer a clear and viable alternative, resident-led process for regeneration and development plans for residents who currently feel they have little power to change things.

* Better understanding of the Tottenham Plan, past and current existing campaigns, and how more people can support or get involved
* Initiate new campaign groups for areas under threat
* Possible formation of a Tottenham community planning and regeneration action network, and other initiatives

Initial statement for call out

Statement of the Our Tottenham network, agreed by OT general meeting, 13.2.2013

REGENERATION: A PROMISE OR A THREAT?
Tottenham is a great place with a rich social and architectural history, made up of vibrant, diverse and talented communities. We want to ensure this continues!

What the Council and property developers are planning for us

The Council are promoting their ‘Plan for Tottenham’, backed by greedy property developers and big business, and by the Mayor of London. It is full of fine-sounding objectives but contains much that should concern us all.

The plans include turning Northumberland Park into a ‘leisure destination’, based on the Spurs mega-bucks project which will dominate the whole area, even threatening some of the existing Council housing (eg the Love Lane estate). The same is true for the busy Seven Sisters junction where the Council is working hand-in-glove with property developers to evict and demolish the much-loved and vibrant indoor market, family businesses and historic Wards Corner building to be replaced by a corporate mall and unaffordable housing blocks.  Meanwhile the new high-rise blocks of Tottenham Hale village are to form part of a new Town to serve commuters into central London and the ‘City’, and corporate chains are being encouraged to colonise Tottenham High Road to displace many of the local independent shops.  The Council is gifting public money and assets to the profit-driven developers, and have so far largely refused to listen to the views of residents.

With policies which protect the community from development being undermined by new planning guidelines – and housing rights, benefits, wages and public services under constant attack – the major effect of all this will be to over-develop Tottenham, force private rents and house prices up, undermine small family shops and businesses, encourage low-paid exploitation of workers, and promote profiteering at the community’s expense. This shows that what the Council, Government and big business mean by ‘regeneration’ is large corporate development and ‘gentrification’ with no regard to our wishes or needs, with the scandalous threat of forced displacement of many local people who can no longer find or keep any affordable place to live.

OUR communities, OUR neighbourhoods, OUR TOTTENHAM!

It doesn’t have to be like that. Together we are very powerful. We pay tribute to all those thousands of Tottenham residents who have campaigned and worked so hard to improve their local areas and facilities. As well as the day to day efforts of so many local community groups, we salute for example the community-led regeneration of Broadwater Farm Estate in the 1990s, the recent £5m makeover of Lordship Recreation Ground led by park users, the Community Centres run by community groups for decades, the 25yr long residents’ campaign to defend and improve Bull Lane Playing Fields, the successful defence campaign for Everybody’s Music, and the ongoing efforts of the Wards Corner Community Coalition to save and regenerate their area of Seven Sisters. There are many more examples and we urge all residents to get involved.

How we can make a difference together….

The Our Tottenham conference will bring together the key local community groups and campaigns in Tottenham who are affected by the Council’s ‘Plan for Tottenham’ and other planning and regeneration issues.  The idea is to work together and fight for our common interests, our neighbourhoods, our community facilities and for the needs of our communities throughout Tottenham.

We are calling on the people of Tottenham to oppose all inappropriate planning and developments and campaign to defend facilities and proposals which are led by local residents, for our benefit, and which improve neighbourhoods for our communities – not just for the benefit of big business. We need to show support for and help initiate new resident and community-led development plans that support the interests of local people.

We hope that what comes out of the conference will offer a clear and viable alternative to the plans of the Council and property developers, and we propose the formation of a Tottenham community planning and regeneration action network to spread co-operation and solidarity throughout Tottenham’s neighbourhoods – OUR neighbourhoods! 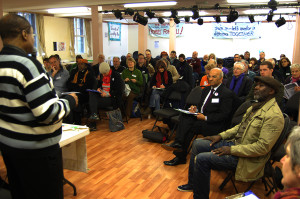 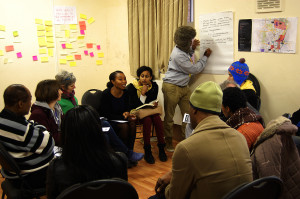 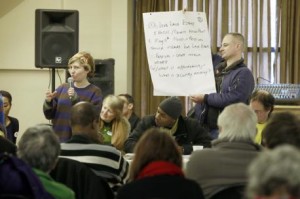 Create your own community plan

Groups and individuals of the Our Tottenham network are supporting each other to create community plans for their own centres, estates, streets & neighbourhoods, parks & green spaces, cycle routes etc. To get involved come along to a meeting, email, or read more: Community Plans

Send a blank email to: ourtottenham_news-subscribe@lists.riseup.net